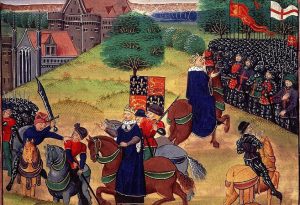 Walter Tyler was the leader of the 1381 Peasant’s Revolt in England. While meeting with King Richard II to state their grievances, he was struck down for “offending the king”. Tyler was carried off alive by his supporters, but was later captured and beheaded at the order of the King. The illustration is from a tapestry of 1384. Due in part to the violence and chaos of the revolt, it lost support and was crushed. Some years later, Richard was overthrown by the nobility, imprisoned, and murdered in his cell. Those events are the subject of Shakespeare’s play The Tragedy of King Richard II.

The question, again, is what does Wat Tyler have to say to modern America? Let us examine this selection from a 19th Century American public school textbook for relevance to our present situation.

WAT TYLER’S ADDRESS TO THE KING

Petitioning for pity is most weak—

The sovereign1 people ought to demand justice.

I lead them here against the Lord’s anointed2,

Because his ministers have made him odious!

His yoke is heavy, and his burden grievous.

Why do you carry on this fatal war,

To force upon the French a king they hate;

Tearing our young men from their peaceful homes,

Forcing his hard-earned fruits from the honest peasant,

Distressing us to desolate our neighbors?

Why was this ruinous poll-tax imposed,

But to support your court’s extravagance,

And your mad title to the crown of France?

Shall we sit tamely down beneath these evils,

Petitioning for pity? King of England,

Why are we sold like cattle in your markets,

Deprived of every privilege of man?

Must we sit tamely at our tyrant’s feet,

And, like your spaniels, lick the hand that beats us?

You sit at ease in your gay palaces;

The costly banquet courts your appetite;

Sweet music soothes your slumbers: we, the while,

Scarce by hard toil can earn a little food,

And sleep scarce from the cold night-wind,

Whilst your wild projects wrest the little from us

Which might have cheered the wintry hours of age!

We toil and sweat for money for your taxes;

Where is the benefit—what good reap we

From all the counsels of your government?

Think you that we should quarrel with the French?

What boots to us your victories, your glory?

We pay, we fight—you profit at your ease.

Do you not claim the country as your own?

Do you not call the venison of the forest,

The birds of heaven, your own?—prohibiting us,

Even though in want of food, to seize the prey

Which Nature offers? King! Is all this just?

Think you we do not feel the wrongs we suffer?

The hour of retribution is at hand,

And tyrants tremble—mark me, King of England!

Yes, there is some exotic imagery, but it does seem eerily familiar doesn’t it? It seems the common people (aka ‘peasants’) had plenty of grievances, but ‘no standing’ in Wat Tyler’s time. With their leader betrayed and killed, the revolution was doomed to fail. When the people who mattered had enough of the king, it was different.

Some of you, my astute readers, may be saying to yourselves, ‘Wat Tyler was centuries before Thomas Campbell’s time’. Yes, that’s so. I doubt that anyone knows exactly what Wat Tyler said to Richard II. Englishman Thomas Campbell, actually, was presenting a thinly veiled threat to the tyrant king of his day, our old nemesis George III; who apparently hadn’t learned a thing from his loss of America. Campbell’s diatribe gives us a good idea of what Americans fought to be free of; and what we stand to loose, are losing, or have already lost. That is why, once upon a time, this piece was included in school books.

Times have changed, of course, but the general drift of the grievances are the same all along. The complaints against George III were similar to those lodged against Richard II. England was again at war to impose a hated monarch on France; this time the heir to the king deposed and beheaded in the French Revolution. Being forced to tolerate it in far off America was one thing, but George III and his court were determined to stamp out the very idea of a ‘sovereign people’ on the European continent.

In Tyler’s day, and Campbell’s day, the masses of people were taxed into poverty, with ‘no standing’ before an insufferably arrogant and grasping government—an ‘extravagant court’ (the privileged courtiers and courtesans who actually were the government), to paraphrase Campbell. The reference to being “sold like cattle” probably refers to English peasants being sold into slavery for debts, or some infraction against their hereditary landlords; the ‘nobility’.

Today, we are being sold, en masse, to big tech, big banking, big pharma, big everything, while small business, and any financial independence, is being wiped out. A modern, highly efficient form of slavery. And perpetual war fattens the military-industrial complex at the people’s expense.

“Courtiers and courtesans”, did he say? Aren’t they some sort of historical characters? Yes, they are as ancient as Biblical times, — and as modern as the guest lists of all the best parties in DC this week. The style of dress has changed since, let’s say, the court of Elizabeth I in 16th Century England, but the characters remain the same.

Courtiers gather around people and offices of power; flattering, scheming, intriguing their ways up the ladder of wealth, power, and not least, status among their peers. They have in common, for the realization of their ambitions, a dependence upon corrupt systems – call them ‘courts’, ‘politburos’, or ‘bureaucracies’ (or ‘swamps’) – that surreptitiously rule decadent monarchies, socialist “people’s republics”, and careless constitutional republics. Advancement by honest work and merit is a threat to them, because such strivers don’t depend upon the corrupt system, and are not subject to its rule. Arrogance, ruthless ambition, greed, and fear of exposure, form the muck that binds together today’s “Swamp”, uniting Democrat, Republican, Socialist.

Yes, self-styled ‘socialists’ constitute a major part of the Swamp.

What do the corrupt politicians, big tech oligarchs, industrialists, leftist radicals, anarchists, militant atheists, Islamists, and ambitious sexual predators have in common? They crave the power of government to force their agendas upon an unwilling public.

Socialist dogma spouted by the Democrat Party, and its ‘etc.’, is simply camouflage for a movement rolling back both republican3 and democratic4 ideology, returning to a system of absolute rulers and the ruled, something all the above interest groups agree upon.

After all, Marxist dogma, in all its costumes, is a strictly Materialist philosophy. Pay attention to this definition of Materialism: “the belief that only physical matter exists and the spiritual world does not; the belief that money, possessions, and comfort are the most important things to obtain in life.” (dictionary.cambridge.org/us/dictionary /materialism)

Materialism/Marxism precludes Theistic religion and all transcendent values like justice, good and evil, truth and falsehood; it is a religion unto itself, completely at odds with all others. Marxist theory is all about how wealth is apportioned, not how it is created. In theory, it is about the worker receiving just compensation for his work; in reality, it is about the rulers enriching themselves. It depends wholly upon human nature for its ‘moral compass’, and it is human nature that has betrayed Marxism’s promises. Lenin, Stalin, and their successors moved into the Czar’s palace, Mao and his successors moved into the Chinese Emperor’s palace, Castro spurned the former Cuban dictator’s Presidential Palace, and built a luxury island paradise.

The Kim family in North Korea went the whole way, and declared themselves to be divine. Ironic, socialism/Marxism circling back to rule by divine right. Meanwhile the the masses of people descended further into tyranny and poverty, with the added burden of the loathsome hypocrisy of Marxist propaganda trying to force upon them an obviously false reality.

Even in America, we see the Clintons and Obamas spouting socialist platitudes but retiring from office to enjoy their multiple, multi-million dollar mansions, while the poor are still with us; as is an increased national debt. For instance, the debt of three hundred and fifty million dollars paid by the Obama administration to Pearson Publishing for work on the Common Core baloney (that includes the outrageous sixty five million dollar ‘advance royalty’ another branch of the same company paid Pres. Obama for his memoir.) That’s how the Swamp works, for those who embrace it.

Even avowed Socialist Bernie Sanders has collected enough money from his phony campaigns for President to acquire several luxurious homes. How? Well, it seems the politicians slipped themselves a clever little benefit. They allow a ‘commission’, a percentage of campaign media buys, to be pocketed by the campaign’s ‘media buyer’; often, as in the case of Bernie Sanders, a wife. So the Sanders collected a generous commission on all the money they spent on his so called “campaigns”, including the millions paid by the Clinton and Biden campaigns to “retire” Sanders’ debts; prior to his endorsement. Running for President, or pretending to, can be a very profitable endeavor for “socialists” who don’t want to get their hands dirty with any real work.

And why shouldn’t socialists be corrupt and cynical – in their minds, the world is all about them and what they can get for themselves, anyway they can.

Capitalism, on the other hand, is “an economic, political, and social system in which property, business, and industry are privately owned, directed toward making the greatest possible profits for successful organizations and people.” (dictionary.cambridge.org/us/dictionary /english/capitalism) It is not all encompassing, as are materialistic ideologies, and does not preclude Theistic religion and recognition of transcendent values. A Christian capitalist can, and many do, limit “the greatest possible profits” to what is left after fair, or even generous compensation to the workers. Nor, of course, does capitalism preclude combining with practical atheism to produce a cruel and godless tyranny; as many businesses also do.

Capitalist theory is about creating new wealth, however, not about redistributing a finite supply. That sets it apart from socialism in its ability to create wealth, potentially for all. Where Capitalism doesn’t fairly distribute wealth, it is the fault of human greed and selfishness, not a defect in Capitalism. It is Christianity that calls these things sin, and makes itself hated by the rulers.

So what did Wat Tyler say to us? “Freedom is not free, then or now.

1. It was a radical idea in even in Campbell’s time, certainly in Wat Tyler’s time, that the people as a whole were ‘sovereign’, that is, endowed with the right to govern themselves.

2. The king, most of the nobility, and most of the common people believed that rulers were ordained by God to their position of authority, a Biblical position. Many people, even besides the kings and their cronies, believed that kings answered only to God. Others, however, believed that the rule of the king was subject to his proper behavior. Tyler, in Campbell’s words, was declaring that Richard, in letting his government oppress the people, had become “odious”, a stench in the nostrils of God, and therefore forfeited his Divine right to rule. That rulers were also subject to God’s law was also a Biblical concept, going back to the Old Testament, But the question was, did the people have the right to overthrow God’s anointed, or did God only have that right? Let it be remembered that the USA does not have a king, but an elected government.